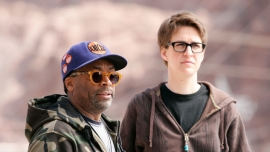 MSNBC unveiled a new chapter in its “Lean Forward” campaign this week with a series of videos directed by Spike Lee.
Lee shot hours of footage of each of the network’s prime-time hosts—including Chris Matthews, Rachel Maddow, and Lawrence O’Donnell—many on location in front of a variety of backgrounds (Maddow is filmed talking about infrastructure in front of the Hoover Dam, for example, and Matthews is seen standing in front of the White House). In each video, which MSNBC executives say were all unscripted, the hosts sound broadly progressive notes on various political topics. “It’s got to be about the people, it can’t always be about the profit,” said Ed Schultz in one clip, filmed at the counter of a coffee shop in his hometown of Norfolk, Va. …more

MSNBC is launching Monday the second phase of its brand campaign under the slogan “Lean Forward” with commercial spots directed by Spike Lee.

Oscar-nominated Matthew Libatique (Black Swan) serves as director of photography for the campaign. The ads will run on MSNBC and msnbc.com, as well as other NBCUniversal networks and in cinemas during the summer movie season. …more